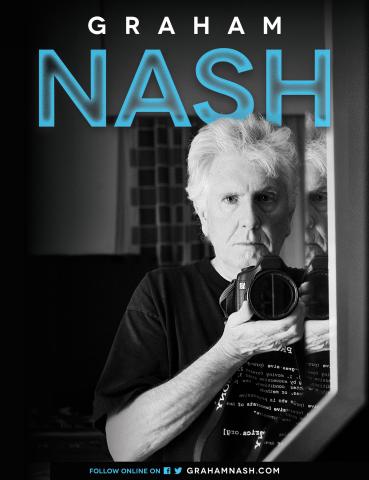 Legendary singer-songwriter Graham Nash will perform a series of “An Evening With” concerts throughout the United States in July and August 2015, kicking off on July 12 at the Vancouver Island MusicFest in Courtenay, BC. Advance tickets, including special benefit seats, are available now at www.grahamnash.com/tour.

This summer, Shane Fontayne (guitar, vocals) will be accompanying Graham Nash on the road.  “I’m really looking forward to an evening of music, stretching back 50 years, and coming round to today with all it's blessings and problems,” says Nash, “a splendid time is guaranteed for all.” Graham Nash will continue his long-time tradition of raising money for charity through the Guacamole Fund’s special benefit seats; in addition, he will be donating $1 per ticket sold to charity.

While continually building his musical legacy, Nash is also an internationally renowned photographer and visual artist whose work has been shown in galleries and museums worldwide, including the Smithsonian. Born in Blackpool, England, Nash was appointed OBE by Queen Elizabeth in 2010.  He first rose to fame with The Hollies, and went on to form Crosby, Stills & Nash in 1968.  Nash has been inducted into the Rock and Roll Hall of Fame two-times (for CSN & The Hollies), and is in the Songwriters Hall of Fame (as an individual and with CSN).  In May 2013, he received an honorary Doctor of Fine Arts from Boston’s Lesley University.  His autobiography - Wild Tales: A Rock & Roll Life - was released on September 17, 2013 by Crown Archetype/Random House, and landed him on the New York Times Best-Sellers list.

Visit the Tour page for tickets and information